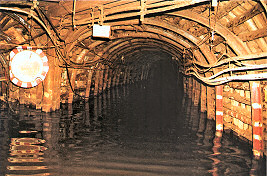 Extract from an Article published in Proceedings: 5th International Mine Water Congress, Nottingham 1994

As a result of the German Reunification the Federal Republic of Germany took over the uranium mines in Saxonia and Thuringia that had been operated by the “Wismut”, an East-German-Soviet company, for nearly 45 years.

East Germany was the third largest world uranium producer (220,000 t until 1990) behind the United States of America (334,000 t) and Canada (240,000 t), followed by South Africa and France [2]. Nearly all of the East German uranium that had been produced between 1946 and 1990 was delivered into the Soviet Union, where it was used for atomic power plants and weapons.

Because the environmental impact of the ore mining and processing was obvious and the world market price for yellow cake low, the East German uranium mining ended on December 31st 1990. Corresponding to article 34 paragraph 2 of the “Einigungsvertrag” (unification treaty) between the German Democratic Republic and the Federal Republic of Germany [16] the Wismut was entrusted with the redevelopment of their plants.

Hundreds of shafts, tips, buildings and a large open pit on nearly 37 km² have to be abolished during the next one or two decades. The goal of all the activities is to obtain conditions that are acceptable for both, people and the environment.

In this paper the problems of the Niederschlema/Alberoda mine in the Erzgebirge will be discussed. This mine near the township of Aue, approximately 40 km south-west of Chemnitz and with a depth of some 2,000 meters was chosen to be flooded in January 1991. Its open space sums up to some 40 × 106 m³, and during the water’s circulation through these openings it will be enriched with various elements present in the rocks. While the majority of them do not have a negative impact on the environment or on human beings, some of them may cause severe problems.

Most of the mine water will flow to the treatment plant through a historic gallery (Marcus-Semmler-Stollen) where it will be processed. Afterwards, reduced in its sulphate, arsenic and uranium content, the water will be discharged into the Zwickauer Mulde, a tributary to the Elbe River.

Flooding of a uranium mine in a well-populated area like the Erzgebirge has potential problems. The hydrogeochemical, thermal and hydrodynamical processes during the flooding are unknown and must be studied in detail. The changes in uranium, arsenic and sulphate mass concentration are of particular interest for the designing of the treatment plant.

Therefore the questions to be solved in Niederschlema/Alberoda are:

They can be assigned to the five following types of deposits:

The Niederschlema/Alberoda deposit belongs to the Schlema-type uranium deposits of the Erzgebirge. They are similar to the uranium deposits near Uranium City/Canada and Chingolobwe/Zaire [11]. It is located in the Lößnitz-Zwönitz syncline, where low grade regional metamorphosed Palaeozoic rocks (Ordovician, Silurian and Devonian) occur. Close to the carboniferous Aue granite they are accompanied by younger, non-metamorphic dykes (aplites and kersantites). Typical rocks are schists, phyllites, diabases, amphibolites and quartzites, all of them strongly deformed by faults and isoclinal folds.

The hydrothermal mineralisation is divided into six “formations”, with different vein types, most of them showing prominent telescoping.

Particularly the quartz-calcite (KKu) and dolomite-veins (mgu) carried the deposit’s uranium content while the quartz-carbonate (biconi) and sulphide-calcite veins (ags) were enriched in arsenides.

Very important for the water’s chemistry and buffer capacity are the frequent carbonates in nearly all of the veins and rocks.

Interactions between water and rock as well as bacterial and radiogenic activity establish chemical conditions that might be in equilibrium. Chemical and physical water analyses are normally used to get data on the waters’ properties.

Since the beginning of the flooding on January 11th 1991 more than 500 water analyses have been made by the Wismut and the Technical University of Clausthal. Up to 59 different parameters were analysed and interpreted, with the emphasis on uranium, arsenic, hydrocarbonate and sulphate. In the meantime the average uranium content increased to 2 mg L-1, the arsenic content to 3 mg L-1 (with a maximum of 6 mg L-1) and sulphate to 800 mg L-1. The pH and the redoxpotential remained stable at nearly pH 7 and 260 mV.

To characterise the mine water, to predict its future chemical behaviour, and to find trends in the data, two different techniques were used: statistical methods and thermodynamic calculations.

The curve fittings of time series for uranium, arsenic, sulphate, hydrocarbonate, and total dissolved solids indicated some significant relationships. For all of the above mentioned constituents equations were found that describe the future mass concentration with a correlation coefficient r² above 0.750. Only radon could not be fitted with a satisfying coefficient. Up to now all constituents show a steady increase with time. Two deposit related quotients Q1 and Q2 were discovered that separate mine waters from fresh waters found in the Niederschlema/Alberoda mine. The results of multilinear regressions from other uranium bearing waters cannot be transferred without counter-checking. The strong relationship (r² = 0.917) between hydrocarbonate and arsenic mass concentration makes it possible to predict future arsenic contents of the water. Thus decreasing the water’s hydrocarbonate content also decreases its arsenic content. However, the future sulphate contents can not be predicted accurately because of bacterial activity.

While the saturation indices of uranium phases, being nearly zero, show the relative stability of the uranium content, that of the arsenic phases shows an undersaturation. Assuming the pH and Eh being stable during the lifetime of the treatment plant the uranium content will also be stable until all the exposed uranium phases will be depleted. However the arsenic content will increase until the saturation indices will approach zero. The future sulphate contents can not be predicted accurately because of the activity of bacteria, converting sulphides to sulphate. Since Ca-ions buffer the sulphate, the pH of the mine water is expected to be stable near pH 7 as in other Uranium mines in the Erzgebirge, flooded about 30 years ago (J. MEYER, pers. comm.).

For the prediction of chemical constituents, chemical and physical parameters from single water samples are important.

Regular monitoring of temperature, conductivity and pH indicate changes in the composition of the water and can provide indicators for establishing sampling programs. Previously, physicochemical measurements in one of the shafts showed that under some hitherto unknown circumstances the pH can suddenly increase. This lowers the water’s potential to dissolve uranium and arsenic, therefore investigations to find the reasons for this change are of importance.

The author wants to thank the Wismut GmbH Chemnitz, the DFG (Deutsche Forschungsgemeinschaft, Re 920/1-1) and the Hanns-Seidel-Stiftung Munich for their financial and ideal support of the work. Thomas Rückwald, Dr. Kathrin Stein, and Melanie Rieckhoff took over some chemical analyses at the Technical University of Clausthal. Special thanks to Dr. Jürgen Schreyer, Jochen Meyer and Günter Fröhlich for three years of discussion and support. I also want to thank an anonymous reviewer for her helpful comments. Last but not at least thanks to Ulrike for their remarks and typing of the manuscript.